I Ruled the Roads - Kind of?

It's 05:45 and I am pulling lycra shorts on...something is wrong with this picture. 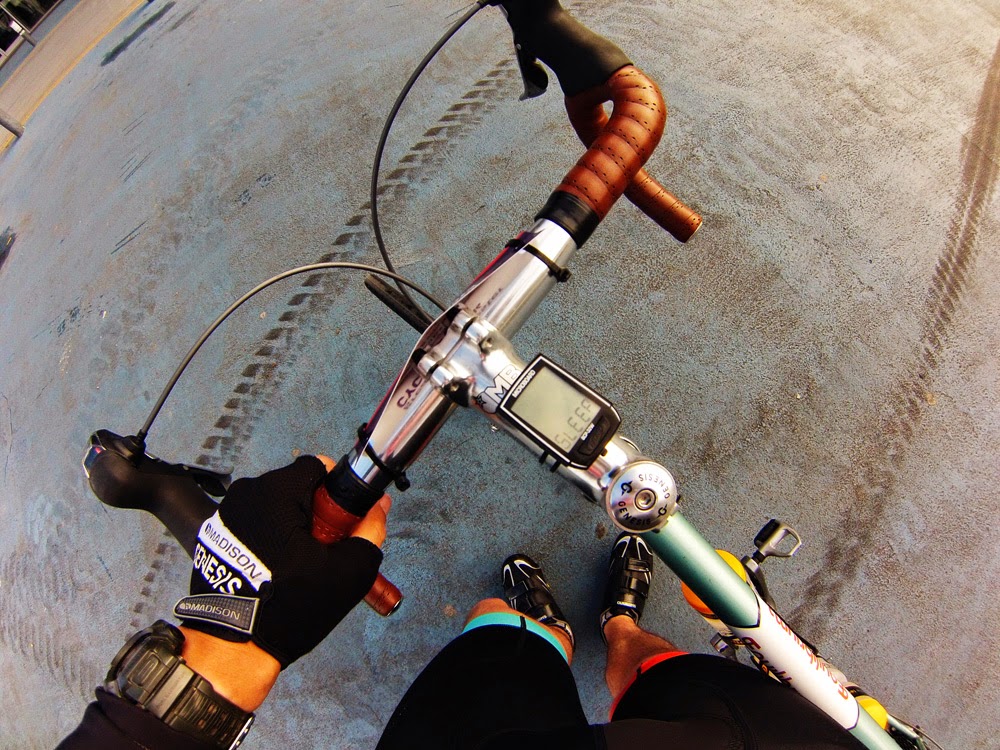 Actually, fashion faux pas aside, I had been looking forward to this day for a while. The truth is, after jumping on skinny tyres for the Ride For Michael Sportive last year  ( yes I still blame you for this Mr Bonney ) I have definitely warmed to the world of Froome and Wiggins. Let's face it, it's all on two wheels and anyone who has hit 50mph + will tell you it is just as mad as mountain bike or bmx action. 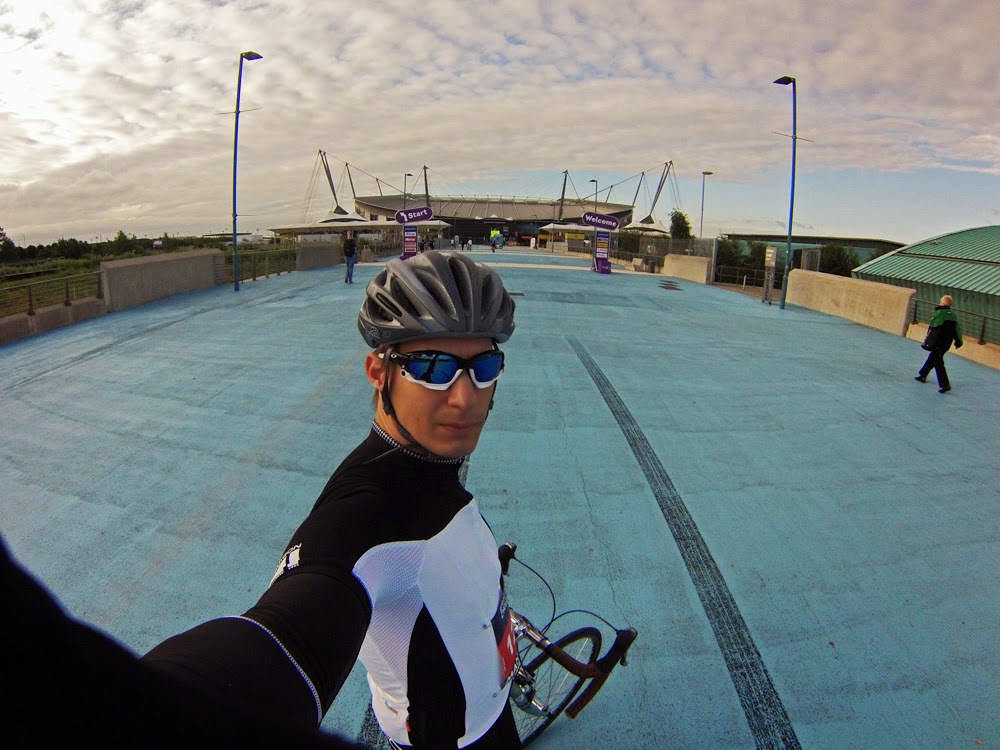 So why so early? Randomly this was because of a relatively local event, the Great Manchester Cycle which I had signed up to in deepest darkest winter. Getting dressed at home meant no embarrassing stretches and lunges to get into those oh so comfortable bib shorts. 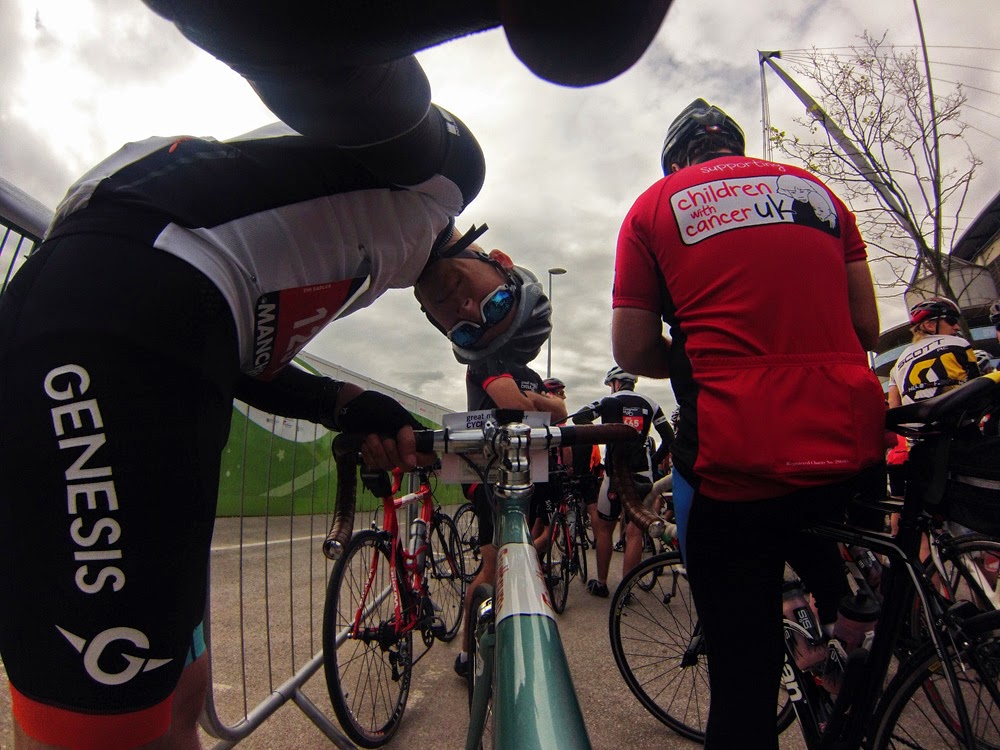 Rocking up to the Etihad stadium was pretty cool. Opposite the home of UK cycling there were loads of club riders getting ready to own the pelatons and win the sprints ( though strictly speaking this was a 52 mile 'challenge' not a 'race' ). I was Billy No Mates again,  ( I should just sign people up so they have no excuses for missing the tickets ), but this meant I could just soak it all up in my own time and get into the zone. Naturaly when I say 'get into the zone' I mean try to work out what on earth to do on the roads of Manchester with 2000 other riders all wanting to beat my Strava time.... 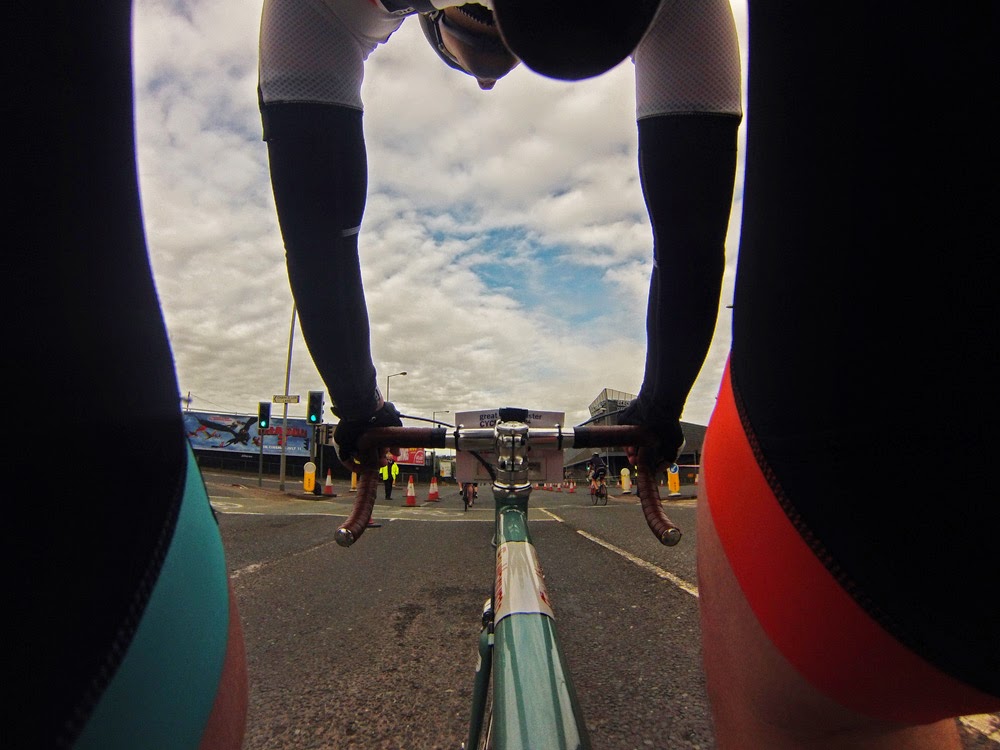 Having been started by a former Hollyoaks star ( who looked very uncomfortable trying to ride a bike more than 15m ), we were off and I was soon caught up in a group of club riders who pretty much dragged me out of the stadium complex. After some tight turns the road opened up and I soon found myself using my Science background and making the most of drafting the more seasoned riders in matching tops. 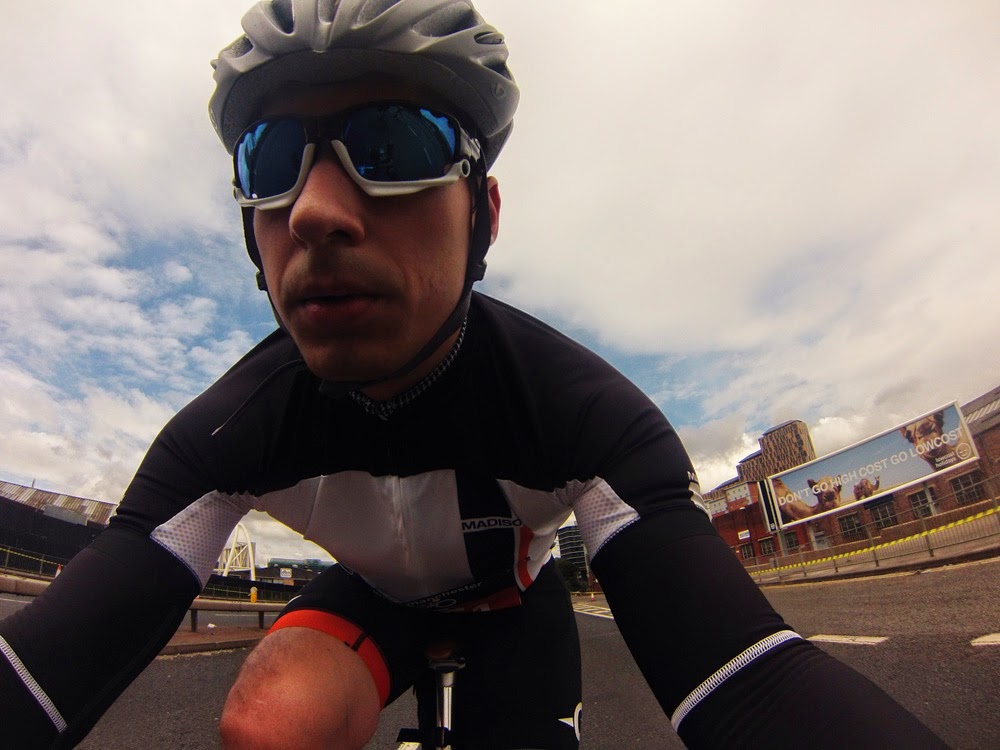 Then it started to get cheeky. On the open section of the Mancunian Way, the club riders who had been forced to start further back made their moves on the front pack. In a blur of carbon bikes and electronic gear shifters I found myself dropping off the main group to catch some space ( remember I generally ride my road bike on my own, so sitting with hundreds of riders was a bit new ). This was a bad idea and as soon as there was a gap the wind hit me and I lost my speed. 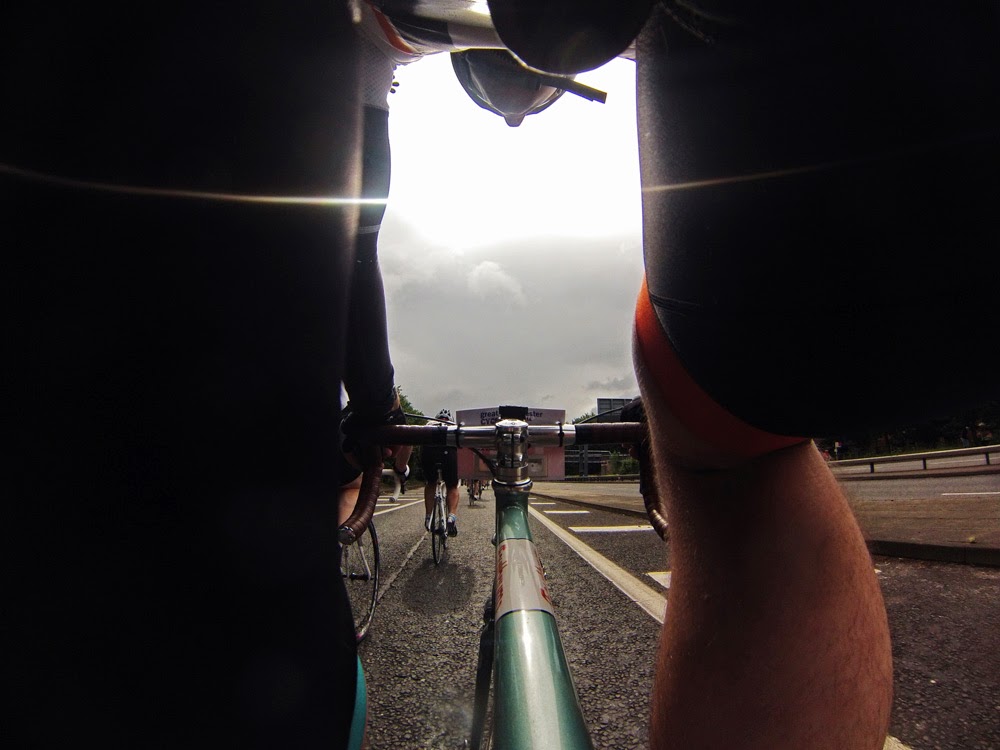 First lesson of big road riding learnt...when in a pack, stay in a pack!

So started my fight back and to be honest it was the stuff of legends. Yes, you could argue that I didn't really make a dent in those front riders, but from where I was sitting astride my mighty Genesis Equilibrium steel steed, I was riding in the Tour itself. I tagged onto faster groups, over took dream machines ( costing more than a nice second hand car ) on the hills going both up and down, broke away when groups got too slow and even lead my own groups and took on whole clubs. 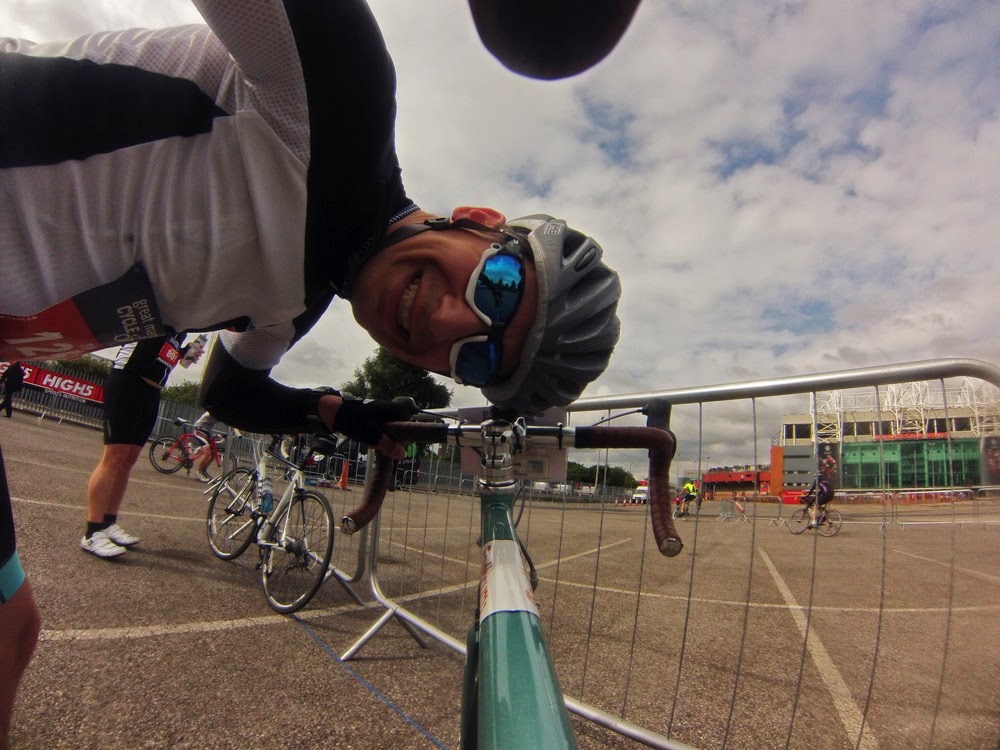 Before I knew it I was on my third lap coming in to Old Trafford, so I pulled in to grab a drink and a bit of an energy slab before heading out again. To be honest I didn't need to stop, I just wanted to extend the ride and change the angle on my GoPro! 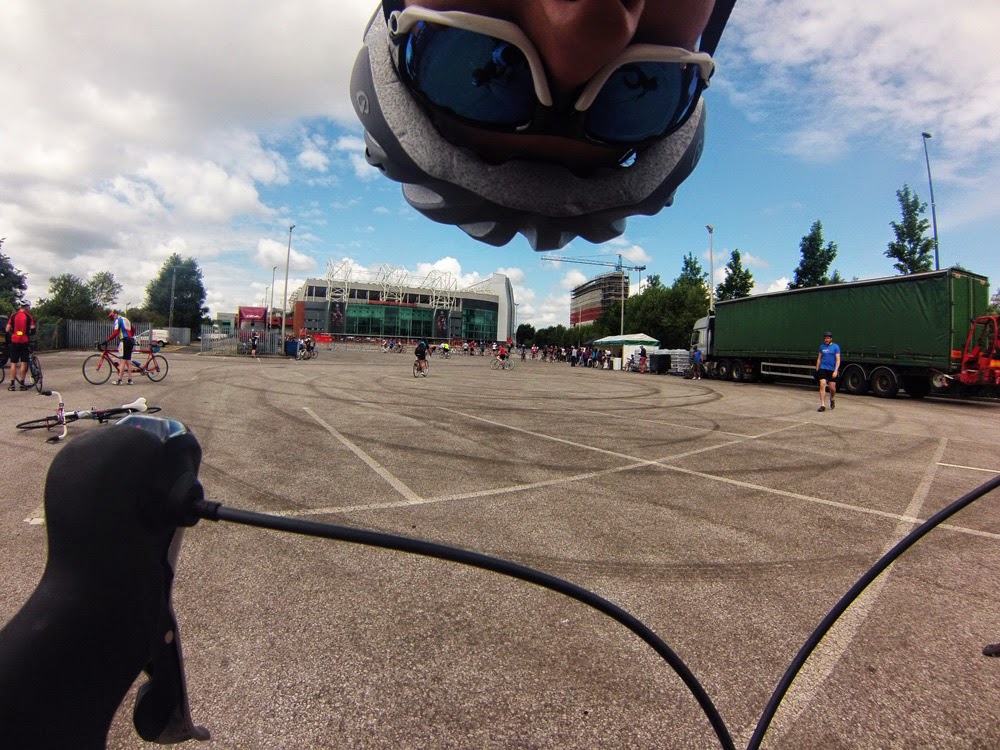 After another technical circuit of the Etihad I was back on the road again for the 4th and final lap. Yes that was it, focusing on the riding, the miles had just disappeared ( and lets face it there wasn't anything to really look at from the ride...hardly out in the hills is it? ). I suppose I should have been grateful that on this last lap I didn't really find any strong groups to tag on to or take on as it meant I could really enjoy spinning on these open roads, but I did miss the madness of the pelatons I had experienced earlier in the day. 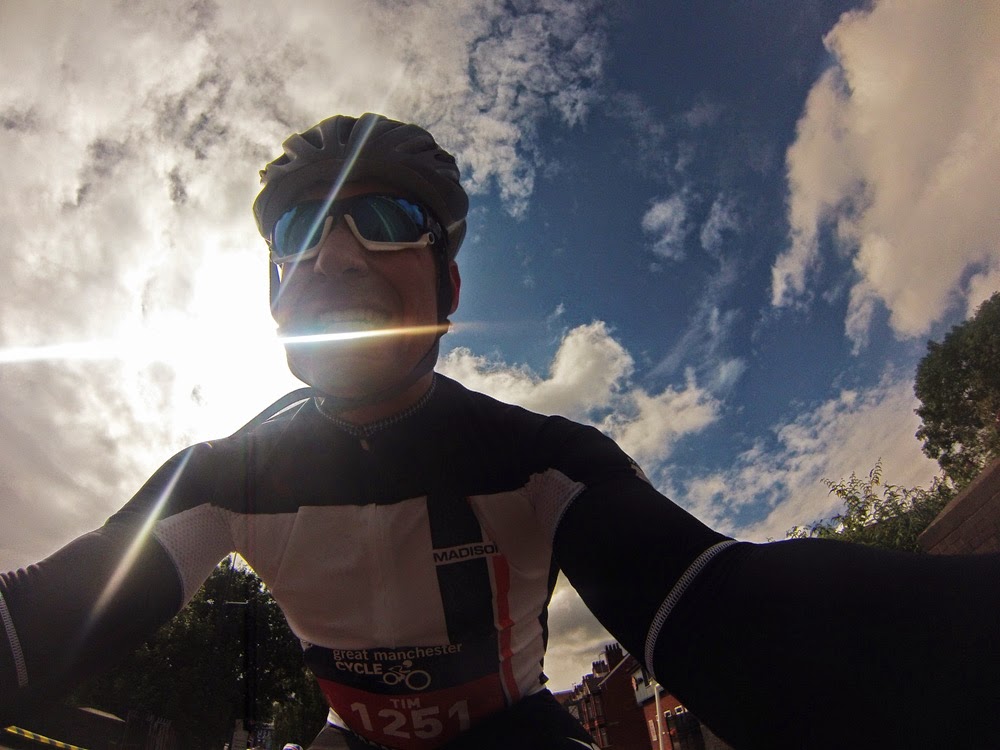 So when can I sign up for next year? 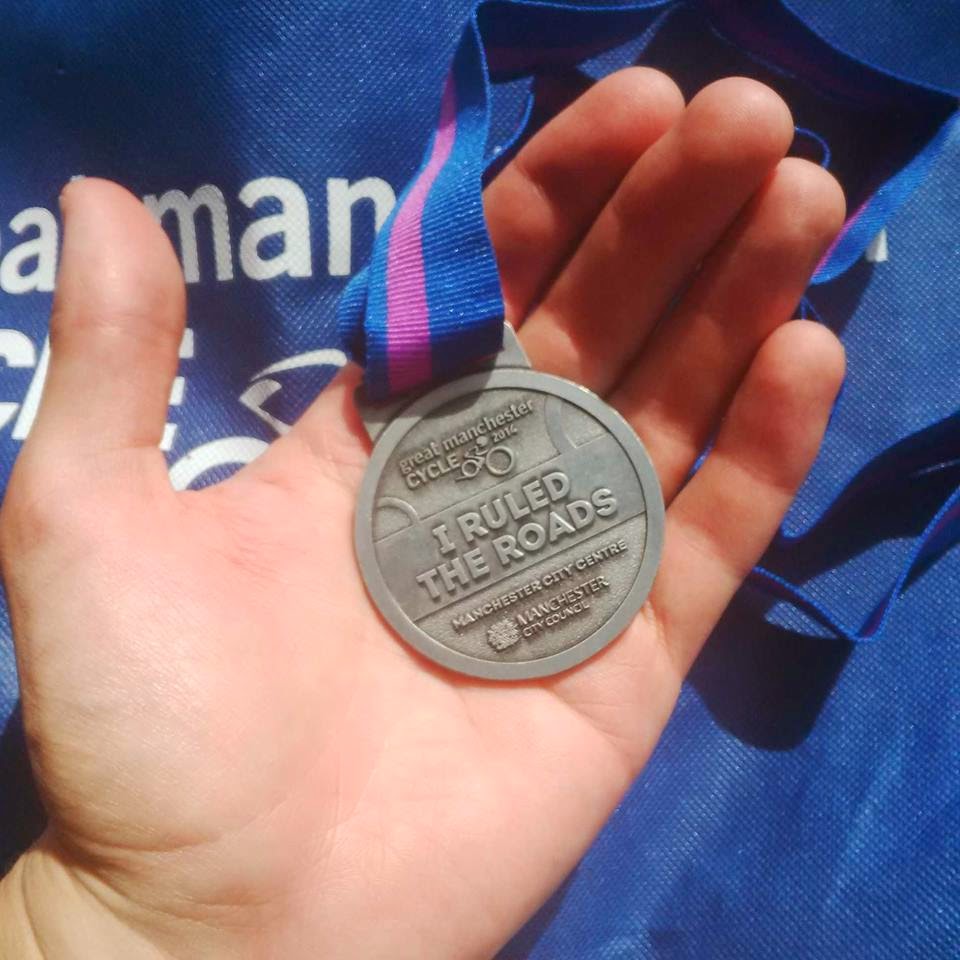 Thanks again to Genesis for and awesome bike.

And thanks for Madison for dream kit which kept me warm during the cold morning, dry during the rain shower and cool when the sun starting to beat down....oh and it looks kick ass too. 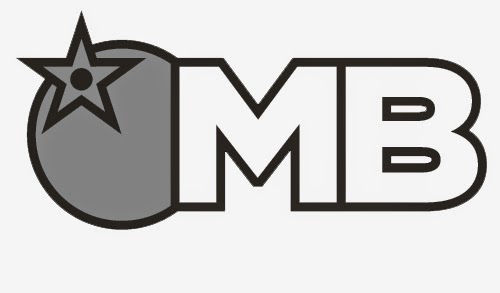