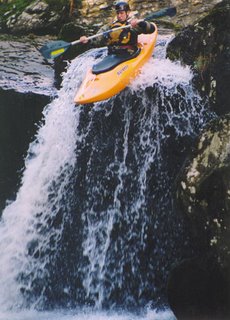 How many times have you got up early, tied the boats on the roof and headed into darkest on what you thought was a superb wet day, only to be met with nothing but a dribble in the rivers? If only there could be an alternative, something you could jump on to get that hit?

Well there is such a place and for most of our early kayaking careers we have walked around it, looking back up and thinking ‘one day they will be mine!’

Pont Cyfyng ( grid ref: 734 572 ) is a bridge over the classic ‘whitewater mecca’ that is the River Llugwy. With many runnable sections, the Llugwy draws a lot of plastic traffic during the winter months, especially with the National Mountain centre, Plas Y Brenin, being up near the upper stretches ( many mistakenly put the ‘Brenin’ on the Llugwy, when in fact it is on the Nantygwyryd ). One such section of this classic river is which can be found directly underneath Pont Cyfyng.

So let’s be clear, what we are talking about it running some waterfalls to get that ‘buzz’! So at this point it must be noted that to run any sort of whitewater is potentially hazardous and to run waterfalls even more so. Use a ‘creek’ boat, spine compression hurts, and if in any doubt of you skills, don’t attempt these falls! Instead stump up the cash for one of the excellent advanced whitewater courses provided by both Plas Y Brenin and Canolfan Tryweryn.

Now back to the action. The Falls consist of three clear drops, conveniently called ‘Top’ Drop, ‘Middle’ Drop and ‘Bottom’ drop. As with any river feature other names have been used, drop 1, 2 and 3 and so on. In truth, it all depends on who you talk to.

Before you get to the actual falls, there is a cheeky rapid before the bridge which is often harder than the falls themselves. Tight and restricting the line is pretty obvious, but worth having some rescue set up, as a swim above the falls isn’t really recommended. However, for those just wanting to ‘park and huck’ you can launch at the bottom of this rapid and just drop over the falls.

The Top fall has a number of lines on it, though many will opt for the ‘’ which is furthest round on river left. A true photo friendly drop, many will remember the black & white shot of the huge T Canyon kayak going over in the classic British Whitewater guide. Another option, if level permits, is a line right down into the guts of the falls. This ‘centre line’ is committing with potential hazards of undercuts and boils on landing , looks good on film though! 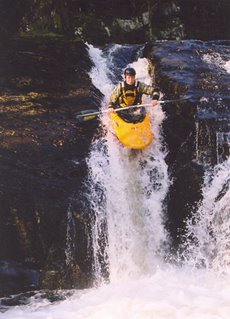 The Middle drop has a number of potential lines in higher water, but in levels where most are comfortable on this stretch, a crack is easily run in the centre of the fall. Running right to left, a little boof stroke is needed just to clear the messy water at the bottom.

The Bottom drop has been run, and a line in higher water is tempting at times, but it is best left for those paddlers who enjoy pain and can afford to take a few months off work with broken ankles.

After checking out this ‘potential’ line, head back up and run the other drops again, just to make sure you have it all on film!

Let experience be the judge! If you are new to the delights of hucking off waterfalls it is best only to consider running these drops when the rest of the river is really too low to be run. Higher levels create more sport for the willing victims! 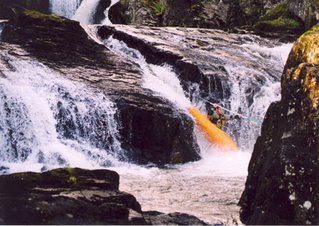 Fortunately there are no real access issues on this stretch of water. This is due to the continuing efforts of the WCA working with the landowners in the area. If you are going to be running the drops, it is a good idea to pop 50p in the honesty box which can be found just down stream.

How to get there.

are located on the River Llugwy and found underneath Pont Cyfyng ( grid ref: 734 572 ). The A5 runs straight by it, so expect some spectators watching in awe. There is a lay-by next to the falls with space for a few cars and further down river there is a larger car park with the honesty box.

Posted by www.vic-tim.com
Email ThisBlogThis!Share to TwitterShare to FacebookShare to Pinterest