Fixed Gear Bikes - I don't get it? 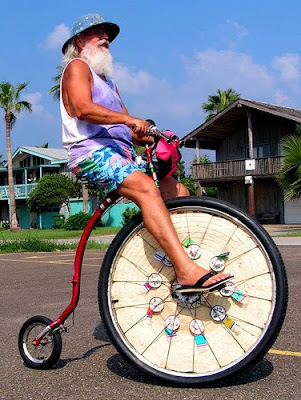 What is it with Fixed Gear Bikes? Whether it is a new Charge Plug ( which seems to be the media's bike of choice ), or a 1970's Track bike, the whole concept of whipping around the streets with no brakes, no freewheeling and no gears just doesn't work in my head.

Even walking around the Cycle Show at Earls Court, everywhere I looked there was either a dodgy hybrid race/mtb/ugly/no gear commuter bike or some strange distrubutor selling an uber cool imported 'Fixie' from the Far East ( apart from Ninjas, has anything really cool ever come out of Japan? ).

It's not that I don't like razzing around the streets on a bike. I spent years communting on a bike from Harrow to Watford ( the 'Basement' years ) and I have a wicked little fully rigid dirt/street jump bike to keep me entertained when we need something from the local shop. It's just that the original couriers who went back to Fixies ( after for a while all being seen on mountain bikes with slicks ) are proper mental and kudos to them, but now every cool kid is adding one of these steel status symbols to their corridors and that just bugs me.

Now we all know what happens when the cool kids buy something....yep, they create a nice little bandwagon which the rest of us can jump on. Just check out this Kidrobot collaboration 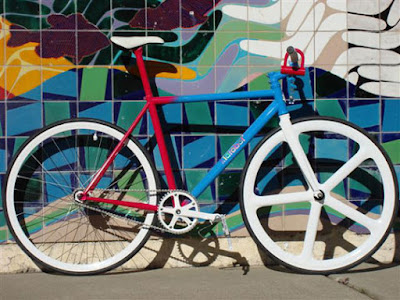 The Kidrobot Fixie - Who was let lose with a paintbrush?
And Kidrobot are not the only collaborators, check out the other bikes on Highsnobiety here. Now there are some very pretty Fixie bikes, the SE Racing Lager looks very slick ( but still doesn't compete with their OM Flyer ),but where will this end? 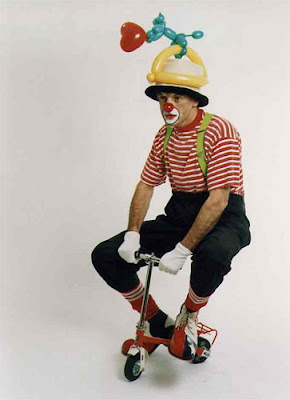 'The' craze for 2009 - The Clown Bike
So what am I trying to say? Not really sure to be honest. Something inside me tells me these bikes are cool ( but then again all most bikes are cool ), they are the ultimate in simple engineering ( you try bleeding 2008 XT hydraulic brakes ) and they do promote urban madness ( and we all love that ). But then again there is another subculture of Fixie riders who not only have to have the best looking bike, but they also insist on doing tricks....that is what has killed it for me.

This movie pretty much says it all...