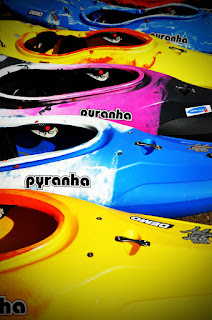 Just hung the kayaking kit up in the garage to dry after a rather enjoyable day at the Dee River Festival . Nothing much has changed since I left the kayaking industry some six or so years ago. Still a good bunch of river folk just wanting to have a laugh, though I do think that some of the young guns need to cheer up a bit. The days of Jose Cuervo Rodeos seems a long time ago.

On the drive to Llangollen this morning I did start thinking about how pivotal this river spot was to me. Keeping the story relatively short back in '97 or '98 I was bored at University and was keeping my brain active in the early days of the net. Usergroups were all the rage and I managed to find a little website run by a chap in Holland. It was called Playak.com ( and it still exists today ). Back then it was a directory of kayaking playspots around the World and it really was in it's infancy. I started writing guides to UK spots and the first one I wrote was for what was then known as 'Eddylines'....believe it or not it is still in the directory here. It was pretty easy for me as we spent hours there in practically every water level and in lots of different kayaks.

From that little guide I became an editor of the site ( we even won an Playboating Magazine award ), and amongst others things I interviewed World Champions in Sort, covered most events in the UK, wrote sections for Ken Whitings Playboating book and then on one trip to the Dee, I was one of the first paddlers in the world to get some water time in an original Pyranha S:6 190 ( fresh out of the mould without a footrest or seat that fitted ). That was my first time meeting Bob Campbell ( now of Campbell Coaching fame ) and when I decided to sell my shares in Outdoorgarage ( who remembers that! ) and move out of London,  it was Bob who offered me a job in Marketing for Pyranha up in Runcorn.

So in simple terms, this section of the River Dee was the opening line to at least one chapter of my story, probably more.

Oh and if you look at the picture on that Playak guide, I did that move today...and hopefully it was caught on camera!
Posted by www.vic-tim.com
Email ThisBlogThis!Share to TwitterShare to FacebookShare to Pinterest
Newer Post Older Post Home